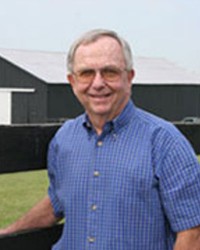 Dr. David Williams is president and co-founder of Burkmann Feeds. Dr. Williams is a native of Bullitt County, Kentucky, where he grew up on a 300-acre beef and dairy cow and tobacco farm. He was an active 4-H member, earned the American Farmer degree in the FFA and served as a state officer in FFA.

At the University of Kentucky, Dr. Williams received his B.S. degree in Agriculture, majoring in Animal Science. He was a member of the Livestock Judging Team, Block & Bridle, Alpha Gamma Rho fraternity, and Alpha Zeta honorary Society in agriculture.

His Master's degree in Animal Nutrition was earned with research emphasis in beef cattle.

Upon graduation, Dr. Williams joined the staff of the University of Kentucky, and later became the nutritionist and director of compliance for the Farmers Friend Mineral Company in Louisville, Kentucky, where he developed the famous MediPac Mineral and many other unique products.

Dr. Williams was the first, and as of November 1, 2012 the only, animal scientist in the world to develop a cattle mineral containing Rumensin to be awarded approval by the U.S. Food and Drug Administration for free-choice feeding. This clearance was based on eight research studies (two at the University of Kentucky, two at Iowa State University, two at Mississippi State University and two at Louisiana State University) proving the efficacy of the nutritional formulation.

Dr. Williams and his wife, Betty-Gayle, live on a farm in Boyle County, Kentucky. Their son, Brent, is a member of the nutrition team at Burkmann. Their daughter, Stacie, is a speech language pathologist with the Boyle County Schools.

Dr. Williams served as treasurer of the Kentucky Cattlemen's Association from 2001-2011. He has served as director of the Kentucky Feed and Grain Association, United Way, Chamber of Commerce and Kentucky Ag Heritage Center. He is currently a member of the Federal Reserve Bank Agriculture Advisory Council and chairman of the board of Ephraim McDowell Regional Medical Center and Ephraim McDowell Health, Inc. in Danville.